2022 is our first year celebrating Russian Old New Year, organised by Artist in Residence, Daria Papysheva in collaboration with fantastic performers and musicians from the Royal Academy of Music. The celebration, traditionally held on January 14th, marks New Year according the Julian Calendar, as celebrated by the Orthodox Church in Russia as a historic holiday, after transitioning to the Gregorian Calendar in 1904.

Our event featured an exceptional evening of opera scenes from Tchaikovsky's Eugen Onegin (1879), and chamber music by the likes of Russian and Soviet composers Medtner, Rimsky-Korsakov, Rachmaninoff, Olenchik and Feinberg:

About the performance at Christ Church Isle of Dogs London, January 14th:

Our first concert this year featured an outstanding performance of Russian music, in celebration of Russian New Year, as celebrated in the old Julien calendar in Tzar times. Beginning with a beautiful performance of Tatiana’s Letter Scene from Tchaikovsky’s Eugene Onegin, opera singer Daria Papysheva introduces us to the vast heritage of Russian opera. From the first note, the audience was immersed in the character of Tatiana, led by a virtuosic performance of the majestic melodies. Daria Papysheva, who is a scholarship holder at the Royal Academy of Music for her Masters Degree supported by the Finzi Award Trust, enchanted the audience with crystal-like sounds, created by her high pianissimo-singing of the words “kto ty moi angel li khranitel” and intimately swelling phrases, creating a truly emotional and dramatic experience. The highly romantic and harmonically complex music of Tchaikovsky leads the character of Tatiana to the next and final scene with Eugene Onegin - what a finale for the end of the first half of the evening! With an emotional and tear-breaking performance, the two main characters part, with Daria Papysheva’s confident stage presence showing her deep understanding of the physicality of the character – from the young and naive Tatiana at the start, to the elegant, established and mature character, who has married into Russia’s high society by the end of the opera.
In the second half of the concert, her stunning performance of Rachmaninoff’s Spring Waters presented her talent and passion for duo and ensemble performances, which was complimented through the clear and gracious passages in the performance of Rimsky-Korsakov’s magical Snow Maiden’ Aria. This year, she holds the position of Artist in Residence at Christ Church, and we are excited for more of her cultural events and performances to come.

Immersed in the atmospheric concert, baritone Alex Ilvahin performed his much beloved music from the heart of Russian repertoire, too. His performance of Onegin was followed closely by the audience, witnessing his desire to win back Tatiana. Through the dramatic staging with Daria Papysheva, complimented by the intimate performance of his aria “Vy mne pisali, nye otpiraites”, Alex Ilvahin showcased his skills as both and actor and singer. His performance of Rachmaninoff's "Vsyo Otnyal U Menya" awed the listeners with his dynamic range, performing the colourful phrases with great confidence.
The next piece to follow was Lenski’s Aria from the same opera – however performed on flute this time, by Timur Dzhafarov - a talented Russian flautist studying at the Royal Academy of Music. Assuming that nobody expected the flute to be able to imitate the sound of a voice, there was no doubt that Timur Dzhafarov was making the flute sing from on the first bar. All the intonations, moods and mannerisms of a singer were performed sensually, captivating the audience with his sound. Moreover, his control of vibrato and variety of tone colours charmed every listener’s experience of the aria. He carefully produced both a beautifully quiet and warm timbre, illustrating the feelings of Lenski’s love, and the cold agitated sound with huge vibrato in the moments of expressing the upcoming duel between Lenski and Onegin. The overall performance was highly commended by the audience, with Timur’s outstanding musicianship and fascinatingly calm yet energetic presence being well praised through enthusiastic applause. With future events planned, we look forward to hearing him again soon - Bravo Timur!

After the interlude, pianist Nikolai Lester opened the second half with the first of Feinberg's Op. 8 preludes. The piece began with a modal haze of otherworldly polyrhythms and broken chords whilst the main melody sang firmly underneath, stating itself in a variety of harmonic colours and dynamic intensities before dying down to make way for the middle section. This consisted of painfully beautiful and melancholic waltz-like music, reminiscent of Scriabin, full of falling chromatic suspensions and reflective, quiet moments. The middle section concluded by slowly accelerating in to a violent, chromatic coda that grew towards the top of the instrument's register before culminating with a restatement of the opening theme amidst a “sparkling, angular shower of quintuplets that eventually brought the piece to a close by descending to a pianissimo tiérce de Picardie”. A truly remarkable performance of an underrated composer.
With pianist Jack Redman performing most of the operatic accompaniment on the evening, he also charmed the audience with a performance of an early piece by composer Rachmaninoff: Elegie Op.3 No. 1 in Eb minor. Opening with a dark, lyrical theme, the piece developed into lighter, more flowing music, leading into a powerful climax, then reprising the opening theme even softer than before, with Jack bringing out the strong contrasts in the tender transitions. The piece soon came to its thundering conclusion, leaving us to wonder if some of Rachmaninoff’s difficulties later in life were foreshadowed in this early piece.

Our third pianist from the Royal Academy of Music, Nikita Demidenko, achieved an incredible sense of nostalgia in his performance of Medtner’s Sonata – Reminiscenza, which also reflects on the composer's quivering feeling about the bygone past. In every expressive upsurge, climax, one could hear Nikita's love for the music and the instrument, through his courtesy, and gentle yet refined touch and idea of sound. Nikita's complete immersion in the musical image, brought the audience close to Medtner's breath-taking life story, as depicted in the Sonata, which remains as one of the most beautiful Russian music pieces of music of his time.
Following the pianists with unusual and thrilling resonances within our space at Christ Church,  clarinetist Ivan Rogachev presented the exciting solo piece “Spanish sketches” by Russian composer Ivan Olenchick. With a performance full of contrast and dynamic movement, he achieved a brightness in his sound, showcasing the full dynamic range and ambitus of his instrument. With great control of the tender high registers, Ivan brought out the Spanish motives, which the Russian composers is presenting to us.

Following the grand applause for all performers, we recognize the outstanding quality of the performance. With great engagement of the audience and our congregation, we look forward to future events with the performers, and wish them good luck on all creative endeavours. It is a great pleasure to host events such as Daria Papysheva’s cultural celebration of Russian Old New Year, as well as her upcoming celebration of International Women’s Day. Watch out and join our Newsletter for more events to come! 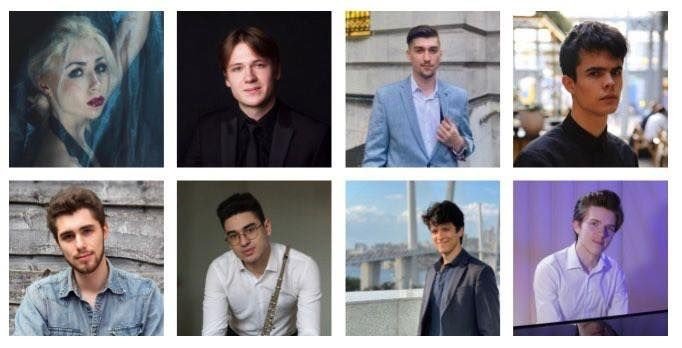 At Christ Church Isle of Dogs we recommend the Parish Giving Scheme as a way of regularly supporting the work of the church.